So Many Ways To Stay Informed

At nosolarbees.com we embrace the latest trends in communication in an attempt to keep you posted as timely as possible.  One innovation was put to work at the last DLWID board meeting, we utilized a mobile app to post the April board meeting report.  This meant that at the moment that the chair gaveled the meeting adjourned we had publish our report to you.  That’s up to the minute!

There are several other innovations that we now offer to help you stay in touch.  They are;

We have been providing regular updates to our followers by using Twitter located at www.twitter.com.  It is free and easy to sign up for a twitter account and it is a worry free way receive updates in real time, that is within minutes of when news breaks.  Follow this link to follow nosolarbees on Twitter.com

Do you prefer to use a feed reader, perhaps on your iGoogle page or smart phone?  RSS feeds are another way to be informed immediately the moment a new article posts on the nosolarbees site.  We can provide you with two options the WordPress RSS Feed and an optimized FeedBurner RSS Feed.  Just follow the links to sign up.

Feel more comfortable with email?  That’s OK, we have options for you as well.  Our first option will keep you the most current; you may now sign up to receive each new article by email. Each morning a new article is published you will receive a message. This new service will allow you to keep current with minimum effort! Click to subscribe to No SolarBees by Email

Want your lake news summarized?  We publish a email newsletter that is designed to focus on current issues concerning the lake. Please sign up for our email newsletter. We also maintain a archive of all previous email newsletters which are available online. Click for the Newsletter Archive 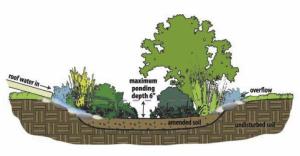 Rain gardens are logical and beautiful solutions to managing stormwater on many properties. The purpose of the training is to help interested residents learn the skills needed to design, build and maintain rain gardens. This workshop will prepare you to serve as a local resource to other community members interested in building rain gardens. Resulting designs from the workshop will be applied to the forthcoming Newport Library Rain Garden demonstration project!

The Department of State Lands (DSL) is in the process of revising its administrative rules governing the management of, and issuing of authorizations to place structures on, and to use state-owned submerged and submersible land.  These rules (OAR 141-082-0000 through 141-082-0210) were last amended in 2002.   As a part of this rulemaking activity, DSL developed and made available to the public its first draft of the proposed revisions to these rules in September 2009.  In October, DSL held three public hearings, one each in Portland, Astoria and Coos Bay.  The public comment period, which originally was scheduled to close on November 6, 2009 was extended to December 24, 2009.   Based on the input received during the September-December 2009 public comment period, DSL has revised its proposed changes to these rules , which are available on below the break. END_OF_DOCUMENT_TOKEN_TO_BE_REPLACED

The Devils Lake Water Improvement District held its April board meeting in their offices on Thursday, April 1, 2010.  The meeting was attended by approximately 14 interested parties.

Whole Lake Circulation – The Lake Manager has asked the Board to provide direction as to how they would like to proceed or not proceed regarding the placement of SolarBees on Devils Lake.  After a breif discussion the Board decided to modify the direction previously provided by the resolution made in June 2009. The Board has instructed the Lake Manager by resolution to defer any further actions toward pursuing SolarBees.

Septic Tanks – The board was updated on the status of the program and the results of the most recent meeting with City officials.  At the March 8, City Council meeting, Council voted 4-2 to direct staff to draft a septic system ordinance based on the eight outlined points approved by both Council and DLWID board.  It was stated that it may be a month or more before the City Attorney begins drafting the ordinance.  Once there is an estimate as to the availability of a draft ordinance the District will select a date to have a meeting for public input on the program.

Save Our Shoreline – Seth Lenaerts described the progress that has been made on this project.  He stated that he intends to complete three shoreline restoration demonstration projects, two on St John’s Loop and one on Lake Cove Drive, at 9am, Saturday, April 3. The project will also require the help of volunteers. The event will be held from 9am to 1pm.  If you are interested in volunteering meet Seth at the Neotsu post office at 9am this Saturday.

There were several other interesting topics on the agenda for the meeting. Here’s what transpired. END_OF_DOCUMENT_TOKEN_TO_BE_REPLACED

Open Request to DLWID Board

I would like to provide input on a important issue on this month’s agenda. In the interest of making the best use of the board’s time, I am submitting you written comments prior to the meeting.  I intend to attend this month’s meeting.  Please take these written comments as my contribution to the Public Comment agenda item for the April Board meeting.

In this month’s Manager Report the Lake Manager has asked the Board to provide direction as to how they would like to proceed or not proceed in this matter. The Board should modify the direction previously provided by the resolution made in June 2009. I would recommend that the Board provide the following guidance in response to that request.

The Board should defer any further actions toward pursuing SolarBees.  The district should continue to seek more information regarding the nature, extent and effects of cyanobacteria and their impact on the health and recreational use of Devils Lake.  The district should continue to investigate methods for controlling all aspects of water quality, assessing their effectiveness and appropriateness for application on Devils Lake.

Attend the April Board DLWID Meeting

The Devils Lake Water Improvement District Board meeting will be held in its offices above Radio Shack Thursday April 1st at 6:00pm. The best way to stay informed is for all lake front homeowners and interested parties to attend these important meetings.

There are many topics of importance to lake residents on this month’s agenda.  These discussions include;  the Native Planting Guide including a the proposed designs of new plant exclosures, review of efforts made in October of 2009 to renew grass carp permits for Devils Lake, updates on the Septic Tank Revitalization program as well as the Save our Shoreline campaign. The board will review and prioritize the districts goals as discussed in last month’s meeting.  Finally, the lake manager has asked the board to provide direction on Whole Lake Circulation (SolarBees), that is, how they would like to proceed or not proceed on the project.

In October 2009, Metro released the 2009 Blue Lake Water Quality Summary Report researched and authored by Whitney Temple.  The report provided a review of the two-year trial of three Solarbees placed on Blue Lake and an assessment of the third year that followed the purchase of the units.  Elaine Stewart, Senior Natural Resources Scientist for Metro shared the report with NoSolarBees and elaborated that the report is “neither peer reviewed nor conclusive”.  She continued that she thought, “it points out the complexities of lake systems and the remedies we implement.”

In March 2009, Joe Eilers of SolarBee released An Assessment of Circulation Technology Applied to Blue Lake, Oregon.  The report was the conclusion of a two-year trial of three Solarbees placed on Blue Lake.  Purchase of the three units was contingent on the success of the trial as access by Solarbee, Inc.  The report concluded that the units improved water quality and based on the report Metro and the local residents purchased the three Solarbees installed for the trial.

For a more detailed summary of the trial and the specific conclusion read on. END_OF_DOCUMENT_TOKEN_TO_BE_REPLACED

A new report has been published which suggested that current studies demonstrate that solar powered circulation of the top-most layer in a thermally stratified lake strongly suppressed freshwater harmful algal blooms (FHAB’s) even in nutrient-rich waters. The report states that the mechanism(s) through which solar powered circulation suppressed FHABs remains unknown, the evidence indicated that the magnitude of suppression increased over time. The study was authored by H. Kenneth Hudnell, Head Scientist for Solarbee and reviewed by Joseph Eilers also of Solarbee, Christopher Jones, Bo Labisi, Vic Lucero, Dennis R. Hill; each employees of the three SolarBee installations reviewed in the report.

City workers discovered the spill eight days after someone passing the wooded area south of the SE 3rd Street reported a foul odor.

Lila Bradley, the City’s public works director, said the spill was caused by a grease blockage in a sewer line about a mile south, at S.E. 19th Street, and that the backed-up sewage had diverted into a abandoned line that crosses the woodland.

“If it had stayed in the area of the blockage, we would have found it much faster.” she said.  “It was an investigative process to find it. END_OF_DOCUMENT_TOKEN_TO_BE_REPLACED