The By-Laws of the Devils Lake Neighborhood Association provide for the number of board members to be between three and twelve with the initial Board set to five.  During its May Board meeting the board was expanded by two seats.  The board appointed a nominating committee to identify and forward qualified candidates for the new positions.  The committee has forwarded Steve Brown and Tom Rice with a recommendation that they be elected to the Board of Directors.  This addition would provided at least one Director in each quadrant of the neighborhood.  Our By-Laws allow for electronic voting which can commence upon receipt of this email until 9:00am October 18th the day of our next General Membership Meeting.  An email will be forwarded with a direct link to the Ballot.

Steve Brown and his wife Nancy has been a full time resident of Lincoln City and Devils Lake since 2006, he is the President of Liquor Outlet Lincoln City and Salem, Oregon. Prior work experience include Director for Fred Meyer Stores 26 years, Vice President Hangars Unlimited a developer of general aviation T hangars in Washington State. Steve has served as President of Associated Liquor Stores of Oregon which represents all Liquor Stores in Oregon and still serves as a board member. Steve keeps aware of current issues that affect the people of Lincoln City by following City Council, Planning Commission, DLWID and the DLNA. He was active in this past election of the new Board of DLWID, in an active participant and homeowner in the new Voyager Sewer LID and has supported the fundraising for the fireworks and election committee of Save Devils Lake. Steve and Nancy have four kids and four grand kids.

Tom Rice has had an active interest in Devils Lake since his family purchased their lakeside cabin in the Neotsu area in 1970.  His parents, Al and Fran Rice, were permanent residents there from 1983 until Al’s death in 2011, at which time Tom and his family inherited their lake house.  Tom and his wife Cheri have a strong interest in the health and future of the lake, and have been active participants of the Devils Lake Neighborhood Association, DLWID Board meetings, and Lincoln City events and activities in general.  They feel the DLNA provides a great opportunity to insure the best possible future for Devils Lake. Tom is an automotive dealership operations consultant and he and his wife currently reside in Newberg. 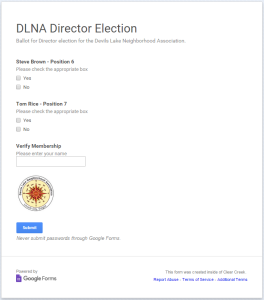