We spent the better part of the day trying to determine what happened this weekend as it relates to a sewer spill as well at the current condition of the water.  During the day calls were made to the Devils Lake Water Improvement District, the City of Lincoln City, the Oregon Department of Environmental Quality, the Oregon Health Department, and the Oregon Department of Fish and Wildlife.  The official answer came down about 4:45 pm when I received call from the City of Lincoln City.  The referred me to the article posted on the News Guard website (read article here) stating that it represented the facts related to the matter.  I would encourage you to read the article in its entirety.

Here are the key elements of the article. The City of Lincoln City’s Public Works Department reported that on Saturday, April 5 at 4 a.m. a sewage pump station overflow in the 2600 block of Lake Drive at Devils Lake resulted in a minor sewage spill that did not reach the lake.

According to Lincoln City Engineer Stephanie Reid about 65 gallons of untreated sewage overflowed and was contained on the lawn area, she said that no sewage made it to the lake.

The spill was caused by a grease blockage which allowed the sewage to spill onto the ground. Crews spread lime at the spill site to disinfect the area. 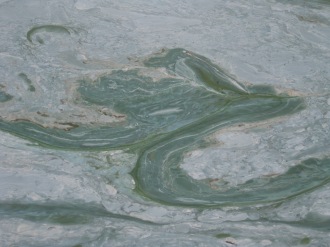 He stated in an email that “the multi-colored scums (grey, bluish-green, green, and even white) which are consistent with types of Blue-green algae blooms. I have attached a photo from 1994 when we had a similar bloom which displayed many of the same colors we have seen in the last few days.”  He did reference the time of year or quantity of these unusual algae.

Finally, during the day today some 20 plus fish were found dead in the swim area at Regatta Park.  (see video  from the News Guard) At this moment we have not heard of others areas on the lake that have experience.  Oregon Department of Fish and Wildlife arrived in the afternoon to observe and sample the water and extract the fish.  Nobody has forwarded a theory as to why this fish kill occurred.  We hope to learn the results of post mortem testing the will be perform by ODFW. We could find no historic reference to fish kill offs on Devils Lake.