A section from the Lake Level Monitoring report contained in Staff Report from the December 13, 2012 board meeting material.  This section drafted by district staff.

A full water quality report was given in September 2012, so only a summary of that data are provided here. The key aspect of consideration was could the lake level be shown to have negatively or positively impacted the water quality. It had been said at the outset that the water quality question would be the most difficult to answer as it is much more variable and unpredictable especially when dealing with living organism, blue-green algae. 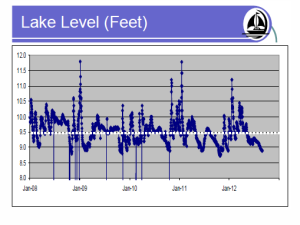 What was apparent from the data set was that while 2012 was a worse year bloom wise from the two previous it was better the 2008 and 2009 when the lake was higher and warmer.

A cursory review of past blooms indicate that 2012 was not the first year we have seen a lake wide bloom. These occurred in 2008 and 2009 certainly, but aerial photographs from the 1990’s show similar events occurring. Bloom constituency was different then, as the more toxic Anabaena and Microcystis dominated the lake compared to the significantly less toxic Gloeotrichia that was the major continuant of the recent bloom. 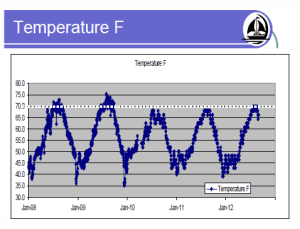 In reference to a recent public comment, what was clear from one of the slides was that the spring of 2012 and early summer were exceedingly wet which could also lead to increased runoff, inundated septic systems and thus blue-green algae blooms of more significance. It is for this reason that the water quality element was expected to be very difficult to pin down and was to be
the least of the reasons potential to consider a change in the lake level. Erosion, salmon issues, septic inundation and shoreline vegetation were a clearer picture scientifically.