A section from the Lake Level Monitoring report contained in Staff Report from the December 13, 2012 board meeting material.  This section drafted by Seth Lenaerts.

In order to determine the impact of lake level on septic systems, the following areas were considered.

Design standards are subject to change and evolve on an annual basis. The most dramatic one time change was in 1974, when the Onsite Wastewater Management Program was created and the Department of Environmental was charged with running the program. Previously septic systems had been under the jurisdiction of the Health Department.

Design standards are developed to ensure that effluent will have gone through a sufficient level of treatment in order to protect public water ways from environmental degradation, and the public from disease.

When discussing the impact of increasing lake level, impacts are primarily seen due to the increase in groundwater depth, and increasing soil saturation. In order for an onsite wastewater treatment system to properly treat effluent using a septic tank and a traditional drainfield, it is important that the first five feet (60 inches) of soil does not have any hindrances to treatment. The most concerning in terms of water contamination are high groundwater/saturated soils, or an impediment such as bedrock or a hardpan.

In order to protect public waters the state of Oregon has the following rules regarding the siting of septic systems and the water table.

Groundwater information for the Devils Lake watershed was collected from the US Geological Survey (USGS), US Department of Agriculture (USDA), and the Natural Resources Conservation Service (USGS).

The table and map below are based on the USDA & NRCS – Soil Survey and describes the soils in the Devils Lake watershed. The Soil Survey classifies all soils in the Devils Lake watershed as “very limited” as shown in the map. The table breaks down the soils by soil name, and the limiting features which earn that soil the very limited title. The red background signifies insufficient depth to saturated zone and the yellow signifies insufficient depth to bedrock. As discussed later in this report depth to bedrock is important when considering shoreline properties since it is likely that the water table follows the bedrock and land contours. Therefore, it can be expected that in areas limited by depth to bedrock, depth to saturated zone is also probably a problem.

The final note on the table is the corrosion potential for septic tanks. According the USGS Soil Survey, 97% of the soils in the watershed are rated as highly corrosive to both concrete and steel tanks, and 3% are rated as moderately corrosive. 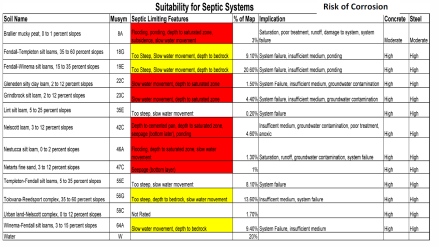 As of 2012 there has yet to be a groundwater study done in Lincoln City or the Devils Lake watershed. The best available information comes from the USGS Soil Survey. As the table “Soil Suitability for Septic Systmes” shows, 16% of soils in the watershed are impacted due to depth to saturated zone. In addition 65% of soils are limited due to depth to bedrock. Depth to bedrock in an important consideration since groundwater will tend to follow the topography of the surface and bedrock. Therefore, if water level rises on the lake, hydraulic pressure will build and groundwater levels will increase. The increase in groundwater levels potentially may saturate or increase the failure risk of near shore drainfields. 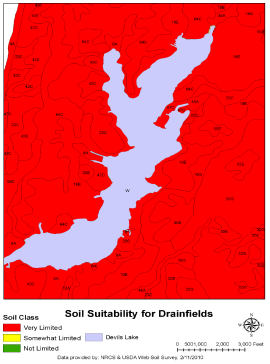 Septic systems are intended to be a rural tool to dispose of sewage in a safe manner. Septic systems are effective when they are, sited, designed, installed, and maintained properly. In order to assure that a system is functioning properly it should be installed in soils that provide an adequate level of treatment, with limited constraints. According to NRCS, all soils in the watershed are constrained and have received the “very limited” designation. NRCS defines ‘very limited” as the following:

“Very limited” indicates that the soil has one or more features that are unfavorable for the specified use. The limitations generally cannot be overcome without major soil reclamation, special design, or expensive installation procedures. Poor performance and high maintenance can be expected.

Soils in the watershed are limited for many reasons including: flooding, ponding, depth to saturated zone, subsidence, slow water movement, too steep, depth to bedrock, depth to cemented pan, and seepage.

For the impacts of lake level discussion, depth to saturated zone, and depth to bedrock, are the most evident, however, increased could also impact other limitations, like slow water movement and seepage.

The map below shows the soil types broken down by limitation, with red signifying the soil is limited due to depth to saturated zone, yellow signifies depth to bedrock, and green signifies the slopes are too steep.

In addition to concerns about soil characteristics, there are many systems that have exceeded their lifespan, or have no public record.

Finally, the density of septic systems around Devils Lake greatly exceeds EPA standards. EPA has said that over 1 system per 16 acres has a high potential 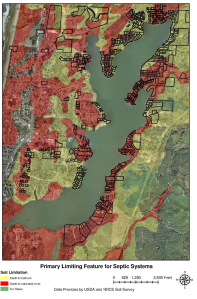 Regardless, lakefront properties greatly exceed both of those standards. Two to three systems per acre is normal, and parts of the shoreline and near shoreline have density rates of three to six systems per acre. Density rates at this level exceed EPA recommendations by as much as 9500% and the one to two per acre standard by 100% – 600%.

Does damming Devils Lake and subsequently raising the lake level impact septic systems? The answer to that is definitely, yes. The follow up to that question is, to what extent? That question is much more difficult to quantify.

However, we can confidently state the following:

Septic systems in the Devils Lake watershed are old, lack records, are being used in soils that the NRCS classifies as unsuitable for septic systems and highly corrosive to septic tanks. Raising lake level only increases the inefficiencies of already inadequate soils.

Groundwater follows surface topography and will generally be at the same level as the surface of the lake. Therefore, raising the lake level, decreases depth to groundwater, which decreases the amount of treatment that effluent receives before entering the groundwater.

A failing system that is discharging directly into groundwater will not show obvious symptoms of a failure, such as slow draining, backing up, or pungent odors over the drainfield.

Areas around Devils Lake have septic densities that exceed EPA suggestions by 4,700%, and parts of the watershed exceed those densities by as much as 9500%. Septic densities also exceed the one to two systems per acre shown to prevent impacts to groundwater. Those densities are exceeded in areas by 100% – 300%.

The integrity of the first 60 inches of soil is necessary in order to sufficiently treat effluent. Raising lake level decreases the treatment zone.

Oxygen is required to effectively breakdown effluent; saturating soils on an annual basis will create anoxic conditions not conducive to treating effluent.